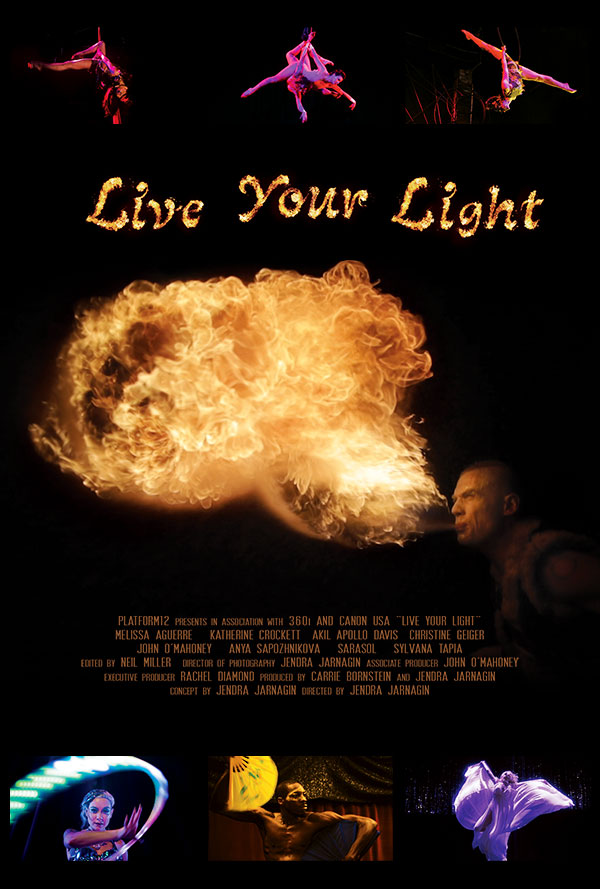 Conceived, directed and photographed by accomplished cinematographer Jendra Jarnagin, this genre-defying short film is a hybrid art/dance film with the visual dazzle of a music video and the heart and voice of an inspiring documentary.

Live Your Light is a celebration of the concept of “Radical Self-Expression,” one of the ten principles of Burning Man culture. Fire spinners, aerial acrobats and cutting-edge dancers from “House of Yes” (circus arts collaborative in Bushwick, Brooklyn)  share their art and bare their souls in this stunning display of movement and spectacle. Backing up their style with substance, we hear from each performing artist about what inspires them to perform and what “living their light” means to them.

Filmmaker Jendra Jarnagin was commissioned by Canon to create this film to be shown at the Whitney Museum for the launch of the Canon 5D Mark iv camera, which was used to shoot this film just one day earlier. The “Teaser” below is an updated version of what was shown at the Whitney, and the full 4 minute film that includes voice-over of the performers, is currently being entered into film festivals and therefore not available online.

Canon’s launch video for the camera can be seen here.  It features a Behind-the-Scenes look the shoot as well as coverage of the Whitney Museum press event. 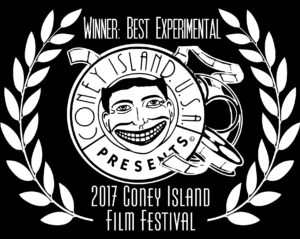 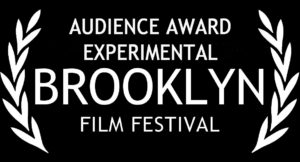 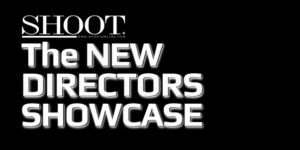 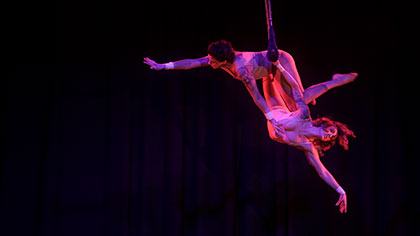 Melissa Aguerre is an aerialist based in New York City. She began as a gymnast and a dancer but took to the sky in 2009 in an attempt to marry the two. She has always had a passion for performance and a deep love for sharing her talents and art. She spent a year at Circus Warehouse NYC, where she grew as an artist and began performing locally in her spare time at various variety shows in Manhattan at places like The Box and The Slipper Room. In 2012, she caught a travel bug that took her around the world for two years meeting amazing people and connecting with artists and performing in Europe and Asia. Though mostly for passion projects of friends and fellow artists, she honed her craft and developed herself as an artist. When she returned to New York, she decided to work full-time as a performer and has only gained momentum since. You can find her on stage or in the air performing for various local productions, at the Box or at the House of Yes, where she maintains a residency.

Anya Sapozhnikova is a co-founder and co-creative director of House of Yes, a venue in Brooklyn that creates culture and community featuring innovative events and performances. Anya grew up in Moscow, Russia before moving to the United States when she was ten years old. Upon moving to Rochester, New York she met her now business partner Kae Burke in high school. She took ballet and gymnastics classes throughout childhood, but it wasn’t until later that she got into aerial performance after moving to New York City and discovering the Burning Man scene and 5 Rhythms dance. Now in its third iteration thanks to a successful Kickstarter, House of Yes has fast become one of the most unique clubbing and performance spaces in New York City. Anya has ten years experience as a club, cabaret and theater performer and is also a founding member of Lady Circus, a high-end circus and live entertainment production company. Anya has produced, directed and starred in countless circus and theater productions throughout New York including Cynthia Von Buhler’s show, Midnight Frolic, Ketamine: The Musical, Foreplay, Slumber and many more. Anya was also an instructor at The Sky Box which was an aerial school at House of Yes when it was previously located in East Williamsburg. There she taught all there was to know about aerial silks for both beginners and advanced performers. Her skills include: theater performance, stilt dancing, aerial acrobatics on fabric, hoop, hammock and custom designed apparatuses with a focus on partnered aerial, innovative and custom costume design, creative direction, event booking, production, promotion, curation and venue management, rigging design and rigging install. Recently recognized in 2016 for her incredible professional achievements and contribution to Brooklyn nightlife and performance, Anya was named in Brooklyn Magazine’s 2016 30 Under 30. 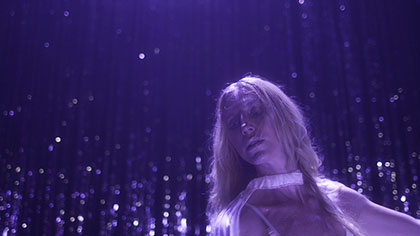 Katherine Crockett starred as the Queen in “Queen of the Night.” She is a former Principal Dancer with the Martha Graham Dance Company, and a guest soloist performing with Baryshnikov. She is Cate Blanchett’s Dancer Double in “The Curious Case of Benjamin Button.” She also is featured in “Ricki and the Flash” alongside Meryl Streep. Crockett was featured on NBC’s “Best Time Ever with Neil Patrick Harris” and the runways of Alexander McQueen, John Galliano and Victoria’s Secret.  She performed at the Cannes Film Festival, VH1/Vogue Fashion Awards, and Gala of the Stars.  She was a featured soloist at The Return Festival in Kosovo hosted by Vanessa Redgrave. Crockett plays the Lead in the feature film “Fall to Rise” by Jayce Bartok. Crockett is the Founder and Artistic Director of ExquisiteMuse Productions, which curates and creates unique immersive experiences and entertainment for public and private events. 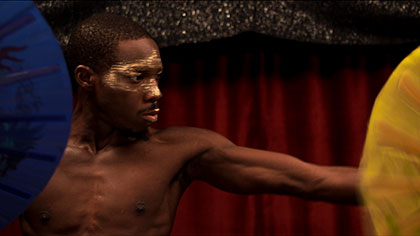 Akil Apollo Davis is a full time Performing Artist and Theatre Professor of Mask + Art Aesthetic. Growing up with Hip-Hop dance in the everyday culture of Memphis TN (there were no “hip-hop dance classes”) and beginning theatre very early on, in 2002 he moved to New York City to earn his Bachelors in Theatre from the prestigious NYU TISCH School of the Arts. During that time his dance, music, and performance experience exploded and has since worked on many stages and in many classrooms.

He has received extensive training in 4 different forms of Balinese dance, 3 forms of Thai Classical dance, Modern dance, Butoh, African, Ballet, Jazz, Kabuki, and Noh. Akil subsequently combined Balinese Thai Classical and Hip-hop to create a new dance form. He is a playwright, a rapper, novelist, a poet, a healer, director, artist, and choreographer. He has trained with Brahmins in Bali, Witches in New York, and Monks in Thailand.

The Brahe method of Mask he teaches is extremely unique (only 4 human beings teach it) which has many references to Michael Chekhov acting technique. Akil has also worked with psychologists at Pace University, University of Memphis, and NYU on emotional development, Suicide prevention and awareness, and bridging the gaps between classical knowledge and esoteric philosophy.

Christine Geiger weaves magical stories through her use of costuming, fire and light.  She has been a professional performer for the past 11 years, both as a solo artist as well as with local NYC troupes such as Lady Circus, Enchanted and the colorful faerie duet Prismatik.  She is known for her incredible stage presence, unusual and captivating dance style, and her alluring characters that fully immerse you in an unforgettable experience where all things are possible.

John O’Mahoney is an actor, writer, producer, and performance artist.

He graduated from Syracuse University’s conservatory acting program in 2002 with a BFA in theater arts.  He appeared in several productions by The Hudson Valley Shakespeare Festival and has pursued classical theater in NY city and Dublin, Ireland where he appeared as the lead role in Satre’s No Exit at the Dubliner Theater.

He has been incorporating fire into his performance art since 2015 and has appeared as Monostatos in the legendary Queen of the Night, and many shows with Flambeuax Fire and others at The House of Yes.

John is committed to producing art that promotes gender, sexual, and racial equality while creating beautiful and disturbing images that upset the American normative mindset.

John loves producing events that promote consciousness and body-awareness through movement and physical connection. He was incredibly inspired to Associate Produce Live Your Light due to his belief that *self expression is something that can heal the world.* 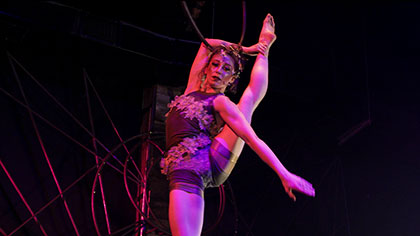 SaraSol is a humble girl from California who fell in love with dance at a very young age.  She found aerial in high school and became a dedicated leader of the team there.  After a tragic accident resulting in a complicated knee surgery, she was told she would never be able to dance again.  Through perseverance with aerial, and her deep love of movement, she recovered, moved to New York, and pursued her career there.

SaraSol is the proud cofounder of Circus Solaris, a performance company inspired by the belief that the future of performance lies in the collaborative spirit and strives to create art that challenges the existing perceptions of what circus can be.  She has flown for the New York City Dance Parade, the Liberty Theater, Theater for the New City, House of Yes, The Diamond Horseshoe, Nick Canon’s Wild ‘N Out, The Poetry Brothel NYC, Jägermeister, Floating Camera, and Vice Magazine to name a few.

Sylvana earned her B.F.A. in Dance and minor in Fine Art Photography from Adelphi University in 2011. Sporting a modern dance education focused on classical modern techniques such as Graham and Taylor, she dances with Maya Kite and Dancers, Caliince Dance, Mazzini Dance Collective, Coyote Dancers, and performs her own solo choreography in collaboration with other contemporary artists. As a freelance aerialist and dance artist, Sylvana regularly works alongside her performance partner Kyla Ernst-Alper under the stage name RAVEN, frequenting venues such as The Slipper Room, Diamond Horseshoe, The Box, The Kymberle Project, Bizarre Bushwick, and House of Yes.

Jendra Jarnagin is an award-winning Director of Photography, with over 25 years experience and dozens of credits in feature films, episodic television, web series, commercials, music videos, documentaries and virtual reality.

Live Your Light is her first short film as Director, since graduating NYU film school over 20 years ago.

Other credits as Director/DP include short-form documentaries such as a fundraising video for Mark Ruffalo for his non-profit organization Water Defense.  She was also “Unit Director” and DP for segments of the international feature length documentary Women Behind the Camera.  She directed and shot a re-make/spoof of Michael Jackson’s “Smooth Criminal” music video for the underground fan film King of Pop Killer.

As Producer, she co-produced and shot the short film Into the Rose Garden, for actor Chase Coleman, and was credited as Associate Producer on the multi award winning feature film TRI, for which she was Director of Photography.  She was also hired to  produce and shoot an instagram commercial for Estee Lauder.

As an editor, Neil’s main concentration has been in advertising.  Recent collaborations have been with Grey Group, Craft, 360i, Dentsu, Anomaly and JWT.

Neil graduated from New York University then toured and recorded as a drummer.  He returned to Manhattan to start his editing career, where he currently resides with his wife.

For Cinematography Inquiries
Contact Agency for the Performing Arts: 310 888 4200

For information about House Of Yes
www.houseofyes.org